A growing coalition of community and advocacy groups are demanding a Police Chief Search Committee that is open, transparent, and made up of diverse community members.

Coalition members will be at the September 12 Council Meeting, 10 am, to ask the Council to take steps to ensure an open, community process.  The Peace Resource Center joins the call in this letter to City Councilmembers:

The Peace Resource Center joins the call on you to help ensure that the $100,000 in public funds allocated to the nationwide search for San Diego’s next Chief of Police is used to establish a process that is transparent, community centered, and informed by diverse perspectives. No to secret panels.

Mayor Faulconer has unveiled his secret search process for our next Chief of Police, which is far from the open and transparent process advocated for by community members.  Instead of creating a panel comprised of stakeholders from a diverse background in the community, the Mayor intends to have interviews conducted by a secret panel.

In response to community pushback to his original plan, the Mayor’s office announced cosmetic changes to his original plan, adding two additional forums but keeping his secret panel. The people of San Diego need transparency and input.  San Diegans need to know who is on the panel and that the community is well-represented.  The Peace Resource Center strongly supports the recommendation that the Mayor and Council establish a 15-member search committee made up of community stakeholders, commission chairs, and youth to choose our next SDPD chief.

This public search committee comprised of: 2 youth, 1 community stakeholders appointed by each councilmember, and 4 representatives from the Gang Commission, the Citizens Advisory Board on Police/Community Relations, Community Review Board on Police Practices and Human Relations Commission. Other cities, such as Seattle, have undergone a similar process and San Diego can too.

San Diego’s next chief of police will set the tone for the department’s relationship with the community.  The city cannot afford the current status-quo any more.

Thank you in anticipation of your support. 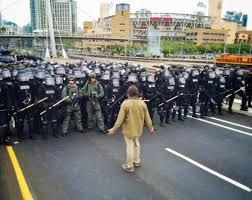