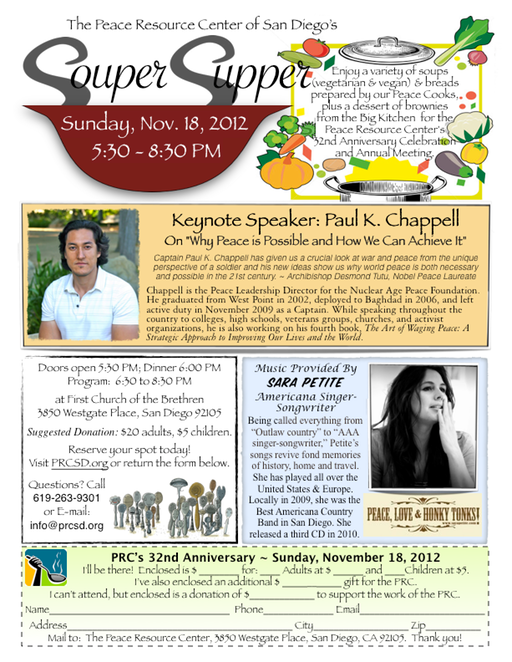 Meet our Guests
(more info below)

Paul K. Chappell graduated from West Point in 2002. He served in the army for seven years, was deployed to Baghdad in 2006, and left active duty in November 2009 as a Captain. He is the author of four books: Will War Ever End?, The End of War, Peaceful Revolution, and The Art of Waging Peace (publication date: October 2013). He lives in Santa Barbara, California, where he is serving as the Peace Leadership Director for the Nuclear Age Peace Foundation (www.wagingpeace.org), and he speaks throughout the country to colleges, high schools, veterans groups, churches, and activist organizations. He grew up in Alabama, the son of a half-black and half-white father who fought in the Korean and Vietnam wars, and a Korean mother.

I currently give workshops around the country on peace leadership, strategy, and tactics to students and citizens of all ages who want to become more effective at creating positive change. I also teach a seven-day Peace Leadership Summer Workshop in Santa Barbara. For more information about the workshop please visit the following site:

To build a foundation for understanding waging peace, which is vital to peace leadership, I am writing The Road to Peace book series. This is a five-book series that provides a framework for ending the wars between countries, our ongoing war with nature, and the war in our hearts. This book series is a resource for anyone who wants to understand how positive change happens on both the global and personal levels. The ideas in these books build upon each other, creating a body of work that challenges the myths of war and misconceptions of human nature. To reveal the solutions to our human problems, each book journeys deeper to unlock the secrets of peace, joy, and what it means to be human.

#2 – The End of War: How Waging Peace Can Save Humanity, Our Planet, and Our Future(Publication Date: April 2010)

#3 – Peaceful Revolution: How We Can Create the Future Needed for Humanity’s Survival(Publication Date: February 2012)

#4 – The Art of Waging Peace: A Strategic Approach to Improving Our Lives and the World(Tentative Publication Date: Fall 2013)

#5 – The Cosmic Ocean: Humanity’s Search for Peace, Belonging, and the Meaning of Life

Click the following link to learn more about the books…

Raised where wild huckleberries grow, Sara originally hails from Sumner, Washington  –  a tulip farming town southeast of Seattle. She grew up riding in her Dad’s seaplane and on the back of his motorcycle. Her mother raised a trio of women and a son, and gave each of them a strong backbone and sense of self.

Being called everything from “Outlaw country” to “AAA singer-songwriter,” Petite’s songs revive fond memories of history, home and travel.   She has toured Europe 6 times and played various clubs, festivals and venues all over the United States and Europe.

Her third independently released CD, Doghouse Rose, debut in the Americana Charts at #33 and rose to #22, and held in the charts for 14 weeks.  It also rose to #9 in the Roots Rock Report.  Locally in 2009 she was the Best Americana Country Band in San Diego.

No stranger to Europe, Petite was first introduced across the pond when her song “Coming Home” from her 2005 debut album of the same name was featured on the compilation CD “Country,” from Universal Music in France. The song and Petite were featured alongside legendary artists such as Tim McGraw, Reba McIntyre, Merle Haggard and Dolly Parton, with whom she’s been compared.

Not just an original voice, Petite is a natural songwriter, evidenced by the fact in her first-ever songwriting competition, three of her songs advanced in the International Songwriting Competition in 2005, with two making it to the semi-finals. Since then, she has been honored in the West Coast Songwriter’s Competition; Great American Songwriter’s Competition; Great Waters Folk Festival Song Contest (Top 5 finalist); San Diego Music Awards (2nd). In 2006, Petite earned the Grand Prize in the 2006 Portland Songwriting Contest.

Sirius Radio  –  Outlaw Country
“She could sing a buzzard of a slop wagon!”  –  Mojo Nixon

On her third album ‘Doghouse Rose’ the twang meets the punch.  A rock edge anchors the rhythms as bent and distorted riffs playfully float by while Sara’s voice pushes through the tracks like a freight train barreling out of the smokies.”

“She is one of the new crop of  female/singer songwriters that are Americana traditionalists, with a Gonzo twist, a rocking attitude that make you want to jump out of your chair.” – Jessie Scott

(Show Review from the Belly Up, Solana Beach, CA) ….But it’s not just her voice, or her award-winning songwriting, or her band. It’s the whole package. And on top of that, you can just tell how much fun she is having performing from the moment she hits the stage (Crazy) to the final note of the final song (Promiseland). Her smile is infectious. Just looking around, everyone in the crowd is doing something. Some dancing, some nodding their heads with the music, some singing along, but everyone is smiling. She has that effect….

Show Review in Brighton U.K.: “Sara is an incredibly gifted artist who defines what country music should be.  No frills, no gloss, great songs, great singing and great playing. One of the best gigs of this century so far…..”      Full review www.sarapetite.com/press.cfm

“We can not recommend this strongly enough”- Aaron Wodoveau