A Bake Sale for the Air Force & Teach-In on Syria

This Tax Day, the Peace Resource Center of San Diego is offering a “Bake Sale* For the Air Force?” in front of the Internal Revenue Serve to highlight our “half-baked” national skewed priorities.

Part of the national call for an end to endless war and the anti-war Spring Actions 2018, we call for a stop to the US use of war as the solution.  Our tax dollars should be used for building bridges – not bombs, walls and isolation.

The recent tweets of terror from the White House underscore the bankrupt nature of our foreign policies.  The Bake-Sale is a Teach-In on the ongoing US effort to “annex” Syria to remind us that US invasion of Syria has long been part of the destructive neo-con agenda for the Mid-East. We demand Congress do its job – hold the executive branch in check.  No ban, no walls, no war on Syria.

The Bake Sale will conclude with a San Diego Tax Day tradition – a local ceremony redirecting war taxes to community need.  Local war tax redirector Anne Barron will redirect her war taxes to local community peace and justice organizations.  “As a conscientious objector to state violence,” Anne explains her war tax redirection, “and I am choosing to value life over destruction with my taxes”.  Part of the National War Tax Resistance Coordinating Committee, she participated in the national 2017 war tax redirection of over $20,000.

—Tax Day Actions Around the Country—

“a final problem mankind must solve in order to survive … is finding an alternative to war and human destruction.”

— Rev. Dr. Martin Luther King Jr., from “Where Do We Go From Here: Chaos or Community”

In Berkeley, California, members of Northern California People’s Life Fund will redirect over $65,000 in resisted war taxes in a public granting ceremony on April 15. The group was founded by war tax resisters in 1971 to pool their resisted war taxes, and this is the largest amount they’ve ever granted. People’s Life Fund member Susan Quinlan says, “There are so many excellent groups that are working to protect families, communities and the natural environment, and we are delighted to support these efforts. With U.S. military spending surpassing $1 trillion, we invite others to imagine what good could come from redirecting these military funds on a grand scale.”

Tax Day Anti-War Actions begin on Sunday, April 15, as a coalition of over 100 groups sponsor rallies and marches under the banner of “End U.S. Wars at Home and Abroad.” War tax resisters in San Diego will be convening actions through the spring as part of this national campaign Spring Actions 2018.   Minnesota War Tax Resisters will be marching in Minneapolis, and members of New York City War Resisters League will demand “taxes for peace” in the Manhattan march. Noura Khouri, who will be joining the march in Oakland, California, says, “Tax resistance is a way to address all of the overwhelming issues facing the earth and its people at this time where literally everything of importance and of value to our communities is under attack.” 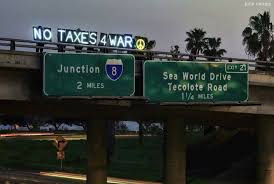 Located within City Heights, the Peace Resource Center is a clearinghouse of peace and social justice resources, issues and activities. We promote networking among peace-related organizations, offer nonviolent alternatives in conflict resolution and carry on an expanding program of peace education in San Diego County. The Center is the local affiliate of the National War Tax Resistance Coordinating Committee (NWTRCC), which has coordinated national tax day actions since 1983. NWTRCC is a coalition of local, regional and national groups providing information and support to people who are conscientious objectors to paying taxes for war. NWTRCC partners with the Global Days of Action on Military Spending coordinated from Barcelona, Spain, to join protests of war spending in the U.S. with a demand for global disarmament and a shift in priorities to sustainable development.

The full list of national tax day actions with more details and local contact information is at http://nwtrcc.org/programs-events/tax-day/tax-day-actions/.