Report Back by Anne Barron

Creech Air Force Base is the main drone training and operations center for the US military drone program. North of Las Vegas in a valley between tall mountains. Camp Justice, temporary home of the SHUT DOWN CREECH activists, sat opposite it, across US-95, from March 27 through April 2, 2016. Just beautiful – I got to enjoy incredible sunsets and snowy peaks. Later, when I found out that the base location was chosen because the terrain is strikingly similar to Afghanistan, I got depressed.

High winds at the start made for several tent disasters at the temporary Camp Justice as well as forcing the shut-down of drone flights for one day. Since our purpose was to slow down the war machine, this was very helpful. So we were there to stop or slow down the US killer drone operations. Were we successful? Enough so that I will be back next year with Veterans for Peace, CodePink, Nevada Desert Experience and Voices for Creative Non-Violence.

Organizers also hoped to connect with the drone operators to encourage them to step away from this new military superweapon, one that allows the US to engage in military strikes around the Middle East with US soldiers far far away. New security measures around the base made it difficult for peace activists to engage in conversations with drone operators coming and going.

Instead, many of us made contact with the Las Vegas Police. Twenty-five people were arrested for refusing to yield to traffic entering the base over two days. We had a really complex discussion around the question of whether to pay fines during the Wednesday non-violence teach-in. Since fines go to fund police departments, and are too often a strong revenue generator, should those of us arrested pay our fines? David Terrell refused to pay his fine, causing him to spend three days in jail. This is definitely a decision that depends on one’s situation but needs serious consideration. If we don’t need to be arrested, then don’t? I opted out.

Activists arrested during the Thursday day of action reported back to Camp Justice that night, with the stories of people they met in the jail. One woman was there because she had turned her left blinker on “too soon”, so the officer stopped her. 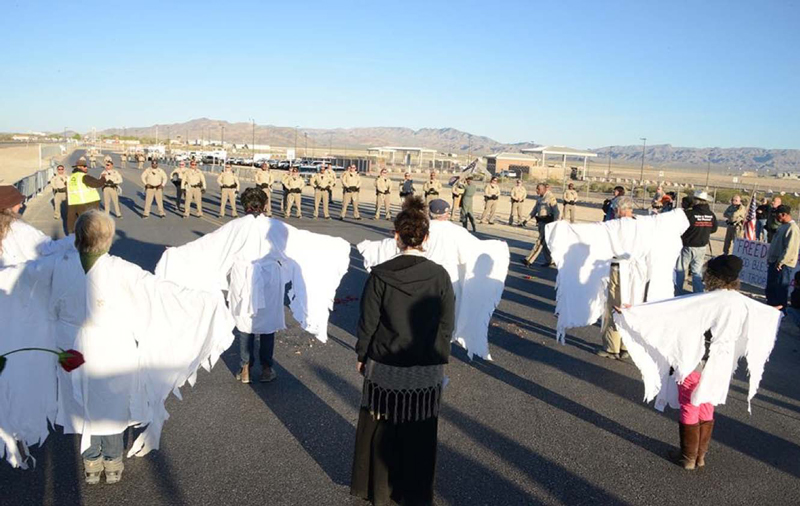 Almost all were people of color. Ann Wright urged us to use our jail time to organize from within, and to tell their stories when we got out. Two of our own also experienced over-zealous policing, when the car with our legal observer was pulled over as it was following the police van transporting arrestees to the city jail. The legal observer was arrested, her car impounded, and her passenger abandoned on the side of the road.

The Vegas police facing off against the activists seemed more like a paramilitary troop – about 2 dozen really big uniformed men huddling around the commander as the last day of actions began. Shouting the Marine “hoorah” cry in unison, they stomped over to face off the children and angels acting out the morning drama, “Double Tap”. Since base operations had been altered to off-set our stalling actions, the excessive deployment of LVMPD seemed pointless. Base personnel had reported to work an hour or so earlier than normal and a new third gate opened to handle traffic jams.

So the deployment of so many police and police vehicles (over 20 at one count) on Friday while giving the residents of Las Vegas a breather from excessive policing was really just a waste of tax-payers money. The militarization of our cities’ police needs our attention. Close ties between the FBI, CIA and even Israel’s MOSSAD with city police departments were revealed after Occupy.

Everyone, please consider donating to WHISPeR, the Whistleblower & Resource Protection Program at ExposeFacts.org. Attorney Radack and two whistleblowers spoke emotionally about the lies we are told by US military about the drone program at the Wednesday Panel “Inside Drone Warfare”. These people are heroes and need our financial support. If they fail, our democracy fails. We cannot let the truth be buried. Jesselyn Radack, also a whistleblower, is moving mountains to defend drone workers who are now speaking out. Marjorie Cohn finished the evening with overwhelming evidence of intelligence incompetence and high-level cover-ups. And news that drone warfare is just the prelude to robotic warfare now in trial experiments.