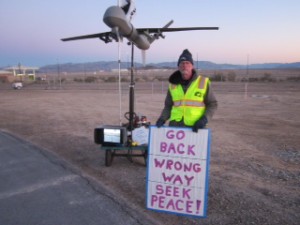 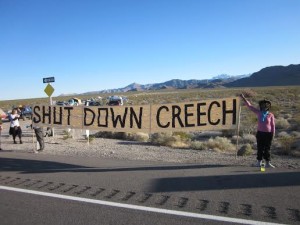 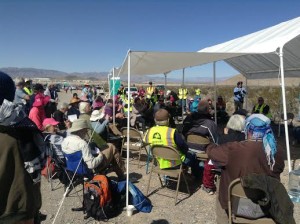 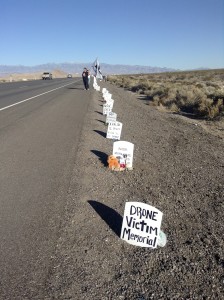 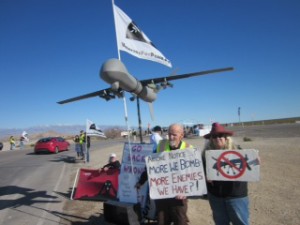 From March 4-6, 2015, I joined activists outside Creech Air Force Base in Nevada for several days of Ground the Drones protests.

Why Creech Air Force Base (AFB):  In 2005, Creech Air Force Base secretly became the first U.S. base in the country to carry out illegal, remotely controlled assassinations using the MQ-1 Predator drones, and in 2006, the more advanced Reaper drones were added to its arsenal. Creech drone personnel sit behind computers in the desert north of Las Vegas and kill “suspects” thousands of miles away. Recent independent research indicates that the identity of only one out of 28 victims of U.S. drone strikes is known beforehand. Though officials deny it, the majority of those killed by drones are civilians. In 2014, it was leaked that the CIA’s criminal drone assassination program, officially a separate operation from the Air Force’s, has been piloted all along by Creech’s super-secret Squadron 17.

Creech AFB is about 40 miles NW of Las Vegas.  Some protestors set up a camp on BLM land across the highway from Creech, named “Camp Justice.”  Others, like myself, stayed in Las Vegas (Code Pink had arranged a great group rate at Texas Station Casino).  We were able to set up banners, signs and a symbolic graveyard of children murdered by U.S. drones along the highway.  Dave Patterson, San Diego VFP, also brought his mock up of a drone which was strategically placed on the highway at the entrance to Camp Justice, and pulled across to a closer location to the base during daily demos.

The population of the camp fluctuated, but about 50 people each day took part in the 8 a.m. and 4 p.m. demonstrations on Wednesday and Thursday..  The times were chosen to coincide with shift changes at the base, so we were able to directly confront and be very visible to the military and civilian employees as they came and went with our signs/messages.  On Friday a.m., about 150 people staged direct actions at the two main gates; with 34 people being arrested and released the same day.  I chose not to get arrested; but would certainly consider it next time.

San Diego Veterans for Peace was represented Dave Patterson, Stan Levin and Barry Ladendorf.  I was the only other San Diego participant, representing of course, the Peace Resource Center.  Gabe Conaway had recently moved from San Diego to Las Vegas and he and I attended the demos together.  Candace Ross, formerly from San Diego, is now living just north of Creech at the Temple of the Goddess which is a continuing witness against Creech and the Nevada Test Site; I was able to visit with her briefly.  Many of our friends from the Bay Area CodePink  (San Francisco) were there and it was great to re-connect with those who had been in San Diego for our no drones demos, including Toby Blome and Holly Severson.   Dennis DuVall from Arizona was also there.

Some thoughts/reflection about the experience:

Seeing the Predator Drones, manufactured here in San Diego, practice take-off, maneuvers and landing was very sobering.  One can’t help but think about their deadly missions and the innocent people they have killed, as well as those “suspected terrorists” killed in violation of international law without any judicial procedure.

On a personal level, it just felt good attending this demonstration and connecting with my own direct action roots by being a visible witness to the atrocities and violations of international law carried out by drones operated from Creech AFB.  We were not too far from the Nevada Nuclear Test Site, where I participated in several demonstrations, was arrested, and also trained others to participate “back in the day.”  Reflecting on those experiences and the continued presence of nuclear weapons in our world was a meaningful though process for me as I think about what it is important to be doing in the world, for myself and for others

On a larger scale, it’s clear to me that continued demonstrations at Creech and other bases connected with drones, along with a steady stream of media info about drone impacts, are having an impact as the Air Force is having increasing trouble recruiting drone operators (see article below).  Being a visible presence at the AFB forces personnel to think about what they are doing and its impacts.

While there was very little media during the protests, it was covered by local Las Vegas press and TV.  In addition, an ad urging drone operators to stop flying drones aired on Las Vegas television.  The demo was covered very well by alternative media, with the Pacifica station from San Francisco Bay area there the whole time doing extensive interviews and articles on progressive sites such as the Huffington Post.  How can we get the mainstream media to pay more attention?

I would love to see more people, especially from San Diego, at these demos.  It was interesting to me how much interest, support and positive comment I got from San Diego folks on my Facebook posts about what was happening at the demo.  People were very happy to know that I was there taking part.  I hope that can be a model for future participation.  Perhaps in the future we can think about how to make it easier for people to participate.

The reconnection and building of relationships with others engaged in these activities was very positive. This was the most friendly and welcoming group of demonstrators I’ve ever been with.  Building our sense of connection, community and solidarity not only locally, but on a larger scale is very important.

Thank you for the opportunity to attend this very moving event!

I hope to do more of this type of activity in the future.

About the Ad that was aired in Las Vegas during Creech Protest: