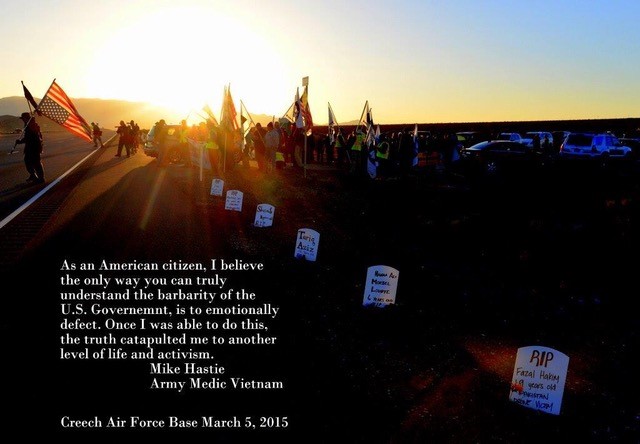 PRC again travels to Creech Air Force Base to disrupt drone operations with anti-drone activists from all over the country .  We mourn the victims of US drone attacks and demand an end to these violent attacks that destroy any and all in the cross-hairs of the drone.

From the organizers of SHUT DOWN CREECH 2017

Anti-drone Activists Mobilize from Across U.S. for 3rd Annual SHUT DOWN CREECH Week.

Where:  Directly Across from Creech Air Force Base, Indian Springs, Nevada, 50 min. north of Las Vegas

Why:  Creech AFB plays a critical role as a key control center for the ever expanding drone assassination program.

A high rate of civilian deaths are the ultimate travesty of the U.S. covert remotely controlled drone killing,

including the recent loss of 46 lives at a mosque near Aleppo, Syria on March 16 due to a US Reaper drone attack.

Details of the week’s program Here.

Four national peace organizations, CODEPINK, Nevada Desert Program, Voices for Creative Nonviolence and Veterans for Peace, have been working overtime for months to prepare for this protest, which will include at least one day of nonviolent peace action to actually SHUT DOWN CREECH starting in the early morning on Wednesday, April 26, as military personnel are arriving onto the base.

“Creech is where the killer drone program started and it is where we shall end it,” say organizers. Activists from states across the country, including as far away as Maine, Wyoming, Washington State, Wisconsin, and North Carolina, will be peacefully joining forces to put a halt to the violence of drone killing and perpetual warfare.

Many of the participants are U.S. veterans, who have experienced first-hand the futility and tragedy of war.  “The U.S. killer drone program is Obama’s tragic legacy, a blunt and homicidal weapon now handed down to Donald Trump, that can only perpetuate this endless cycle of violence,” said Brian Terrell, event organizer.

Anti-drone week will include:

Mon – Fri, Apr. 24-28, daily vigils (6-8am and 3-5pm) – Changing themes daily: Mon. am:  “15 Men” to honor the 15 civilian Afghan men killed by a U.S. drone attack last September, while celebrating a Hajj. Activists will hold 15  life-size cardboard human figures, marked with name, age and occupation, stretched along the highway. Tues am:  Funeral Procession with coffins and black clothing with white masks;  Thurs am: Drone Victim Memorial Highway, with large banners honoring the victims of some of the most heinous U.S. drone attacks on wedding parties, mosques, funerals and schools.

3 activists who peacefully resisted drone killing at Creech last November will put drone warfare on trial by representing themselves pro se.  Story & watch video HERE. Mon. 8:15 am Pre-Trial Rally with defendants in front of courthouse:  Two whistleblowers, who formerly worked in the US Drone Program, will be available for media interviews.

Wed, April 26, Day of mass nonviolent direct action, starting at crack of dawn, as military commuters arrive at base.

Shut Down Creech activists are collaborating with local human rights activists to voice our opposition to President Trump’s oppressive policies against Muslims and immigrants and to stand in solidarity against all forms of militarism, at home and abroad.  NO DRONES, NO BAN, NO WALLS, NO DEPORTATION……Protect the planet from Trump’s Hate and Oppressive policies. Large  7 ft. drone model to attend!  Flashmob Dance in Las Vegas afterwards.

In all of the week’s actions, demonstrators will demand the permanent banishment of :

BACKGROUND:  Creech Air Force Base,  is one of the most critical drone bases in the U.S. and is the site of control for CIA and Pentagon targeted drone killings that terrorize communities and remotely kill civilians and militants in Afghanistan, Yemen, Iraq, Pakistan, Somalia and elsewhere.

In 2015, A whistleblower leaked important military documents, known as The Drone Papers, that uncovered much of the covert program, including making public that in one 5 month period alone in Afghanistan 90% of those killed were civilians, according to the U.S. military’s own research.  Thus, as government and military officials have continued to emphasize that drone assassination is like “laser surgery,” taking out the worst of our enemies, all independent research and even confidential military documents show that the civilian toll is vast.

SHUT DOWN CREECH is collectively organized by CODEPINK, Veterans For Peace, Nevada Desert Experience, Voices for Creative Nonviolence and Women’s International League for Peace & Freedom. Nearly 25 other peace & justice organizations are endorsing the event, including Courage to Resist, a veteran founded organization that provides assistance and support to US military personnel who want to resist current wars.